The Value of Mapping the Ebola Outbreak

In June 2020, during the COVID-19 pandemic, new Ebola Virus Disease (EVD) cases were confirmed in western Democratic Republic of the Congo (DRC). Unrelated to the Ebola outbreak winding down in the eastern part of the country, these cases marked the beginning of DRC’s 11th Ebola outbreak, and its third one in three years, with a previous outbreak occurring in the same region just two years prior.

The first EVD cases were found near the busy river port city of Mbandaka, the capital city of Équateur Province located on the Congo River. This river is an important transportation hub, connecting millions of people to villages and cities throughout the region.

As more EVD cases increased in multiple locations throughout Équateur Province, finding reliable data of settlements or where people lived was a challenge.

To get a clear and accurate picture of Équateur Province, an area slightly larger than the US State of Virginia, GRASP GIS Analyst Jeff Higgins (contractor, Perspecta), analyzed existing maps and data. Unfortunately, in many cases, existing Geographical Information System (GIS) data for Équateur Province boundaries, which are divided into geographic areas, were outdated or non-existent.

GRASP’s long history of supporting CDC’s Emergency Operations Center began in 2003. Higgins’ previous geospatial support and knowledge during the 2018 Ebola outbreak in eastern DRC provided a foundation for his support to the Ebola outbreak response in the western part of the country in 2020.

“People don’t always appreciate the long journey of creating maps and how valuable they are for responding to emergencies—from interpreting data on PowerPoint slides to gain insights on where to send responders on the ground, to showing leadership exactly where the outbreak is occurring and how close clusters are,” says CDC Division of Global Health Protection Health Scientist Dante Bugli.

Specifically, the mapping products and data coordination activities were useful for

Near the end of the outbreak, there was concern that the virus may have spread across the river from DRC to the Republic of the Congo. Health officials requested maps showing populations living along the river border between the two countries. With these maps, officials could measure distance and visualize locations with greater detail. Additional maps showed a more expansive view of the Congo River and other area rivers. CDC’s Emergency Operations Center used one of the border maps for situational awareness.

GRASP’s extensive analysis in creating accurate data and updated maps were critical in helping officials identify where people lived, where EVD cases were occurring, and where to send healthcare workers. On November 18, 2020, the Ebola outbreak in Équateur Province was declared over.

Since then, as an embedded team in CDC’s Emergency Operations Center, GRASP has continued to support domestic and international response efforts, including CDC’s response to COVID-19 and global polio eradication efforts.

Top of Page
On this Page 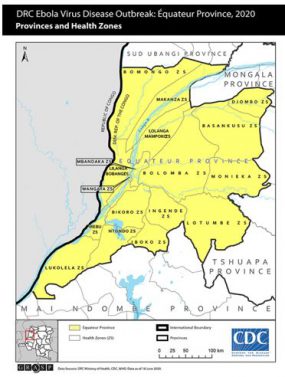